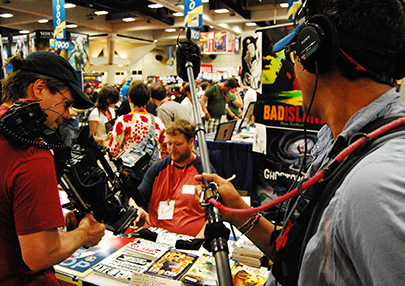 Nancy Oey is a veteran producer with more than 15 years experience in television production. Her producing credits include writing and directing one-hour documentary programs for the award-winning TV ONE series “Unsung” and the HISTORY CHANNEL series “Modern Marvels.” She has also delivered segments for PBS’ “Wired Science” series and various Discovery Network programs. She holds a history degree from Dartmouth College and currently resides in Los Angeles.

Dylan O’Brien is an innovative Director of Photography who has collaborated with directors on numerous reality, documentary and narrative programs. Dylan is probably best known for his work on the hit series “1000 Ways To Die” and “Monster Garage,” where he played a key role in creating the style that has become the signature “look” for each series. In the fictional film genre, O’Brien has shot various shorts and features. His latest is the soon-to-be-released horror film, “Raze” starring Zoe Bell and Rachel Nichols.

Lissette, a native Angeleno, has edited everything from stop-motion animation to competition reality TV shows. Directors find that she has a deep passion for what she does, especially when editing documentaries. As an editor, she is known for her strong ability to tell compelling stories and to develop fascinating characters. When she isn’t working, she is seeking adventures… Whether it’s hiking in National Parks, skydiving in wine country, or checking out historic sites around the country, she’s always out exploring. Some say that her zest for life is only matched by her epic love for her two awesome dogs.